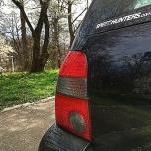 I love the sunroof!